It sounds promising, doesn't it? Alternative Minimum Tax. Two of those words convey a sense of hope. Alternative - like you have options. Minimum - like you could pay a smaller amount of tax.

I hate to burst your bubble, but neither is true. Alternative Minimum Tax (AMT) is misleadingly named. There is no option - if you owe it, you pay it. Likewise, it does not minimize anything - if you owe AMT your tax bill will be larger as a result. Perhaps it should have been named the Required Higher Tax.

There are many conditions (26 or 27) that may trigger AMT, but the most common are large Schedule A deductions for other taxes (state, real estate, personal property) and/or a mortgage interest deduction for a loan used for something other than buying or improving your home. (You took a home equity loan to buy a sailboat or fund your child's education.)

The Alternative Minimum Tax (AMT) is treated like an 'additional tax' by the IRS, but in reality it is a parallel tax system to the 'regular' federal tax system. Everyone's federal income tax is figured under both systems and whichever way the tax bill is higher, that's the one you pay.

AMT is calculated on form 6251, and I made the graphic below to show how it works (relative to the 'regular' tax system). The AMT system follows the 'regular' system right up until you have taken your Schedule A deductions, then it goes in a different direction. At the end it throws the results back into the 'regular' system on form 1040 line 45. However, if you look at how the math works you can see that it is really a separate tax system known as the Tentative Tax System. 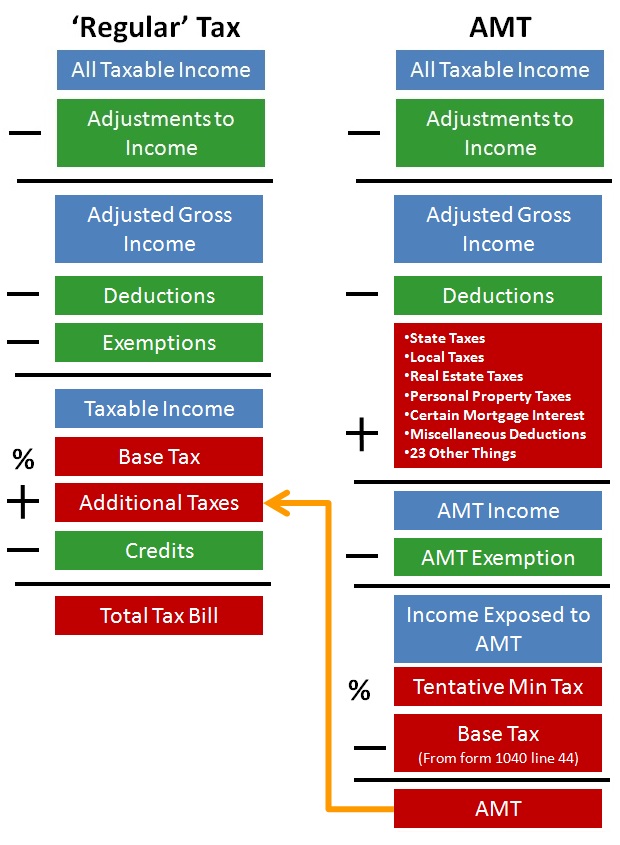 With AMT, after taking your deductions you must add back any of the 26 things listed on form 6251 you had previously taken off your taxes, starting with the taxes, mortgage interest (not used for acquisition or improvement of the home), and miscellaneous deductions you took on Schedule A. There are 23 more add-backs on form 6251. (Notably: accelerated depreciation of business assets. AMT uses a different (slower) depreciation schedule.) Adding those 26 items back produces your Alternative Minimum Tax Income (AMTI). The Tentative Tax System equivalent of AGI.

If you're paying AMT and you have children in college you may want to look at not claiming their exemption(s) on your tax return. If you're paying AMT you're not getting anything for the exemption (note how it is missing from the calculation of Tentative Minimum Tax. It is actually possible to have so many exemptions that you trigger AMT!). Your child may not be able to claim their own exemption, but they may be able to claim some education credits on their tax return(s) if you don't claim their exemption.

The bottom line is that you want to plan to avoid paying AMT if at all possible. There are some ways to manipulate your deductions that may make AMT avoidance possible. Every situation is different, so we'd have to look at all the variables to know for sure. AMT is extremely complex. If you have questions please contact me.