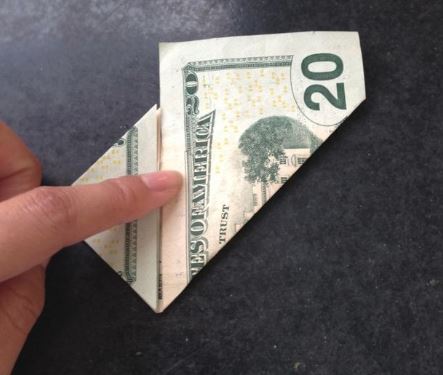 A very nice couple I will refer to as 'The Creases' came to me earlier this year with a request to review their tax returns from 2014 – 2016. They were clearly frustrated and anxious about their taxes. They had confidently prepared their own tax returns for many years, but their taxes had risen so dramatically the past few years they were no longer certain they were preparing them correctly.They even wondered aloud if they were perceiving reality correctly. "Maybe we're crazy, but this just doesn't seem right."

My mission was two-fold – find out if they were filing correctly, and come up with a strategy to reduce their taxes. A challenge I eagerly accepted.

I found a few errors on their returns and we amended them for a refund. It’s always nice to get more of your money back from the government, but the errors I discovered were only a small fraction of their overall tax bill. These errors were not responsible for the large increase in their taxes over the past few years. Even after amending their returns their tax bill had increased considerably from 2014 to 2016. With both their 2014 and 2016 tax returns open on my computer monitor at the same time, I could clearly see what was going on with their tax situation. I am going to use their tax returns to show you what I mean by the crease.

The crease is my term for the point – usually between around $100K and $140K of income for married couples filing jointly – where your taxes are increasing at a faster rate than your income. You are making progress in your career, your pay goes up (which is good!), but your taxes go up even faster (which can leave you feeling frustrated and anxious like the Creases).
Let’s look at the Crease’s numbers (after they were amended) to see how this works. These are real numbers from real clients living right here in Virginia Beach. I screenshot and chipped their 2016 numbers and laid them next to their 2014 numbers. 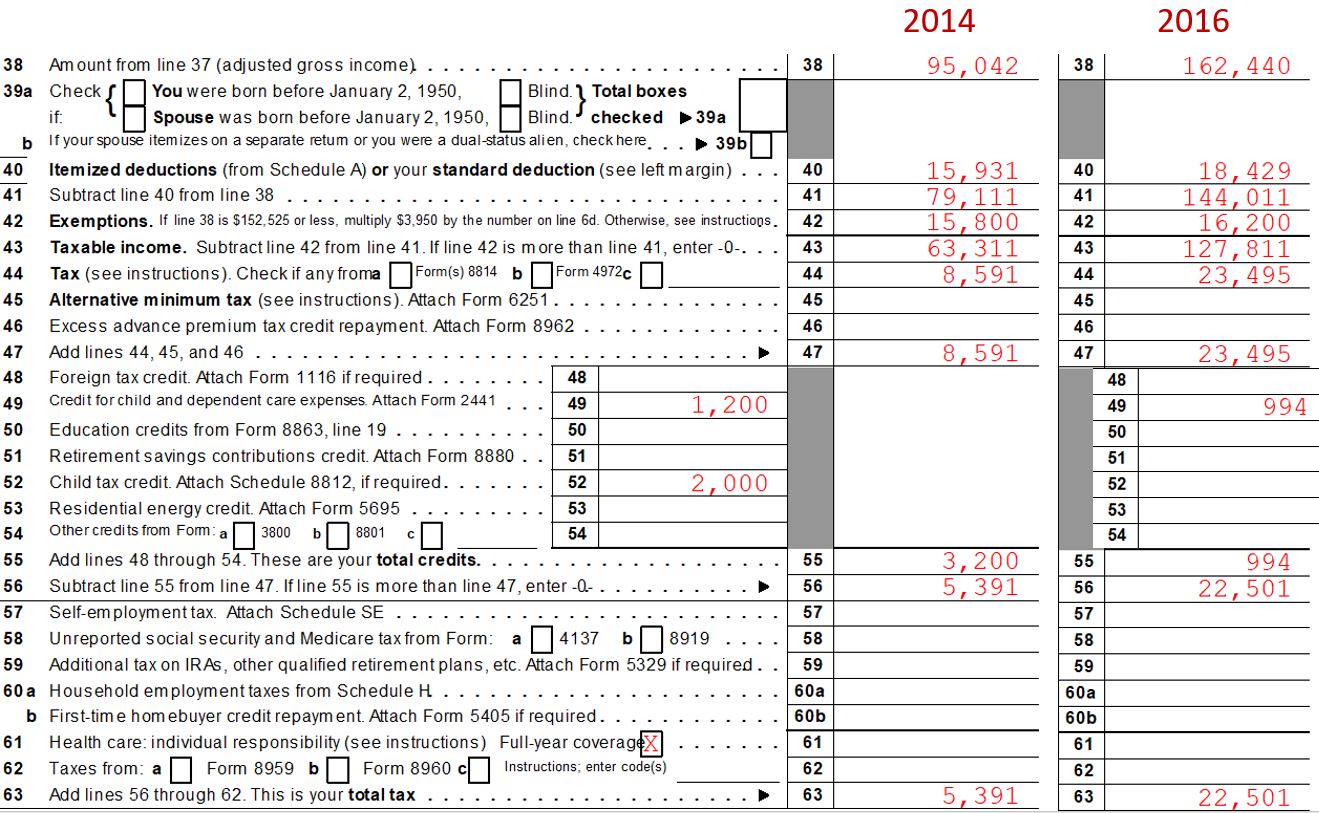 If you’re a tax geek like me you love that picture, but I think it probably looks a bit overwhelming to most people. To make things easier to digest I pulled the important information off their tax returns and put them into a table to ‘declutter’ the numbers and make them easier to follow. The 2014 numbers are in blue. The 2016 numbers are in red. 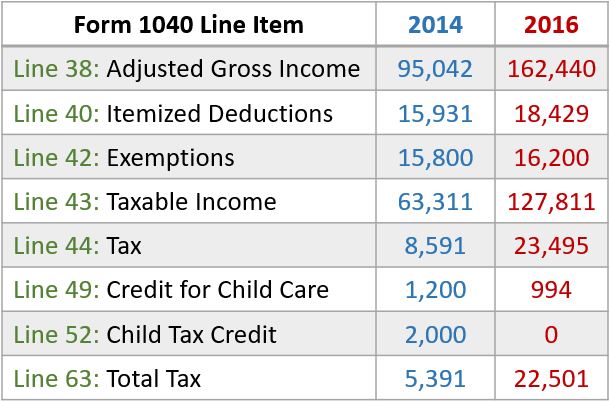 Why Do Taxes Increase So Quickly In 'The Crease'?

Let's dig a little deeper into the Creases' numbers. If you look at line 40 and line 42 you can see the Creases didn’t lose deductions or exemptions from 2014 to 2016. In fact, the amount of income they could deduct and exempt increased a little bit over that span. The problem is they can’t get much more work out of their deductions and exemptions. It's all applied to the 2014 numbers and it doesn't impact the additional income they had in 2016. Nearly all that additional 2016 income passed straight through to taxable income (line 43). Their AGI went up 70.9% from 2014 to 2016, but their taxable income (line 43) more than doubled.

Next comes the impact of our progressive tax system. In 2014 the Creases' top marginal rate was 15%. The additional taxable income they had in 2016 was nearly all taxed at a higher rate – 25%. Not only is ALL the new money taxed, but it is taxed more aggressively by the federal government.

Finally, let’s look at line 52. In 2014 the Creases had two young children, which qualified them for the Child Tax Credit of $2,000 ($1,000 per child). This tax credit directly reduced their taxes owed for 2014. In 2016 the Creases still had two young children. However, the Child Tax Credit is subject to a maximum AGI threshhold and their increase in AGI made them ineligible to receive it. No $2,000 reduction to their tax bill in 2016.

What To Do About It.

If you recall, the Creases also tasked me with finding a way to reduce their tax bill. I did, and I want to show you the results of my favorite easy-to-use tax-reducing strategy: increasing retirement plan contributions. Mr. and Mrs. Crease were both contributing to their respective 401K plans at work. He was saving $4K and she was saving $5K. The maximum allowable contribution is $18K each, so they had a combined $27K ($14K for him plus $13K for her)  before they were both making maximum allowable contributions. Below is a table of the projected 2017 results if the Creases make no changes from 2016 other than to make maximum contributions to their 401K plans. 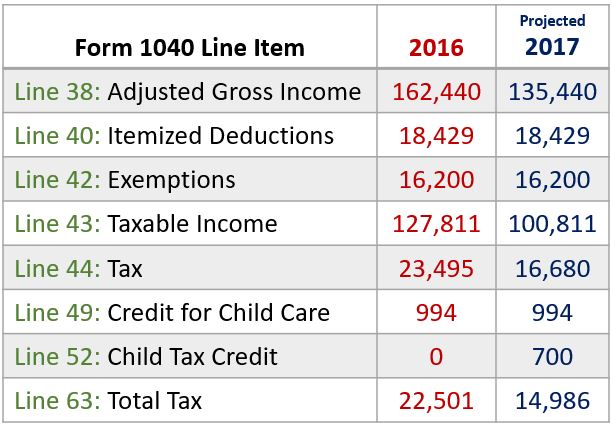 I left their deductions and exemptions unchanged from 2016 to my 2017 projection. When we get to line 43 you can easily see the $27,000 additional contributed to their 401Ks comes directly off their taxable income. Lower taxable income equals lower taxes.

I know…stuffing another $27,000 into your retirement accounts is a lot of money – but let’s look at these numbers a couple of ways to help you frame the advantages:

You invested $27,000 and the government gave you back $9,067 to do it. That is an immediate, guaranteed 33.58% return on your investment. If you don’t like that 1-year ROI, don’t ever let me hear you complaining about CD rates. That’s a rare and fantastic deal!

OK, that’s enough of me nerding out on taxes and numbers for one post. Just remember, if you feel like your taxes are rising faster than your income, they probably are. ‘The Crease’ is real. There are also some things you can do to reduce your tax bill. If you’d like to discuss your tax strategy, come see me.