5 Tips for Reading Your W2

Most taxpayers know what a form W2 is. If you're expecting a tax refund that's the form you're checking the mailbox for every day until it arrives because you can't file your taxes without it. (That's probably old school. Nowadays most people are probably checking to see when their W2 is available for download.)

It's official name is the Wage and Tax Statement. The IRS dictates who has to file them (employers) and by when (31 January). Your employer has until the end of January to have your W2 to you. If you don't have it by then, start asking questions at work.

I started writing a post to explain the W2, but it was starting to look like a book! Instead I decided to answer the 5 questions about the W2 that get asked the most.

The IRS does not require a specific format for the W2, only general guidance is provided. Box 1 must have the same information on every W2 (wages, tips, and other compensation), but Box 1 can be anywhere on the form. The boxes don't have to be in order, and sometimes they aren't!  As a tax preparer I am not a fan of W2 creativity. I see a large variety of W2 styles and I frequently need to hunt for the information I need.

2. Why did I receive so many copies of the same form?

The IRS specifies that you must receive 4 copies of your W2 - 1 for federal, 1 for state, 1 for municipal (in case you pay municipal income taxes), and 1 for you to keep. To save money, many W2 preparers have opted to put all 4 copies of the W2 on a single sheet. They can do this by reducing the font size and making the information quite difficult to read. It also makes losing a single detached W2 very easy when they are one-fourth (or smaller) of the size of a normal sheet of paper. This 4-copy system is a relic from the era of paper filing. Now that most filing is electronic, people usually end up with 3 or 4 copies of their W2 after their taxes are filed.

A generic W2 for reference: 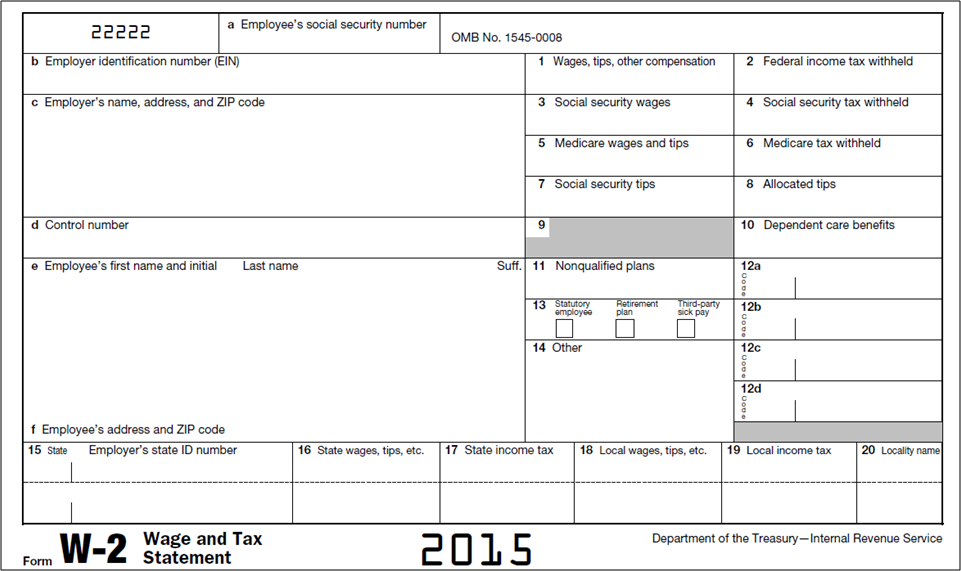 If your income in Boxes 1, 3, and 5 are different and the reason isn't stated above, come see me. We'll figure it out.

It means the government wants to keep track of ALL of your compensation, not just the wages paid to you. Most commonly I see codes D and E, which are your 401K or 403B retirement plan contributions respectively. I also see code C, employer's taxable contribution to a life insurance plan. Code W, employer contributions to your cafeteria plan or health savings account. There are quite a few other codes. The W2 will sometimes have them written on the back (in very small font) or you can look them up online.

5. I am only doing 4 years in the military, why is Box 13 "Retirement Plan" checked?

There's quite a bit more to form W2 than I covered here. If you have questions please contact me.