If you want to make yourself crazy this tax season, call around to different tax preparation places and try to get a straight answer over the phone about how much they will charge to prepare your taxes. It's pretty rare to get one. The most common answer is "we charge by the form, so it really depends on which forms you need to file your taxes." I know this because I gave that answer quite often when I was working for one of the large tax preparation firms.

I wanted to give a straight answer, but I couldn't. The truth is that I didn't know how much the company was going to charge. The rates were set by the corporate office in another state, and I didn't know what they were. Sometimes I would use my experience with other clients to provide an estimated range to the person calling. "I think your tax preparation fees are going to be between $200 and $250." I had to give up trying to do that, though, after I had guessed low a few times. The customer would rightfully be irritated when I told him on the phone I thought it would be $250 and it turned out to be $400. It was easier to deal with a customer's frustration of not getting a straight answer than it was to deal with a customer who felt like I lied to them on the phone.

One thing that made estimating the fee for tax preparation difficult was the game most tax preparation firms play with their fees. The fees being charged change throughout the tax season. At higher volume times the price goes up. At lower volume times the price goes down. I suppose that's just supply and demand, but try to tell that to a single mom who had to schedule her tax preparation appointment around everything else going on in her life. She doesn't always have time to consider the timing of her tax appointment to coincide with the best pricing opportunities. She needs to get in and get it done before the sitter goes on overtime.

Below is a graphic I made showing how the tax fees at most tax preparation firms tend to change throughout the tax season. I also added my impression of the corporate attitude at the peaks and valleys. You can use it to help you plan your tax appointment with the large tax preparation firms. 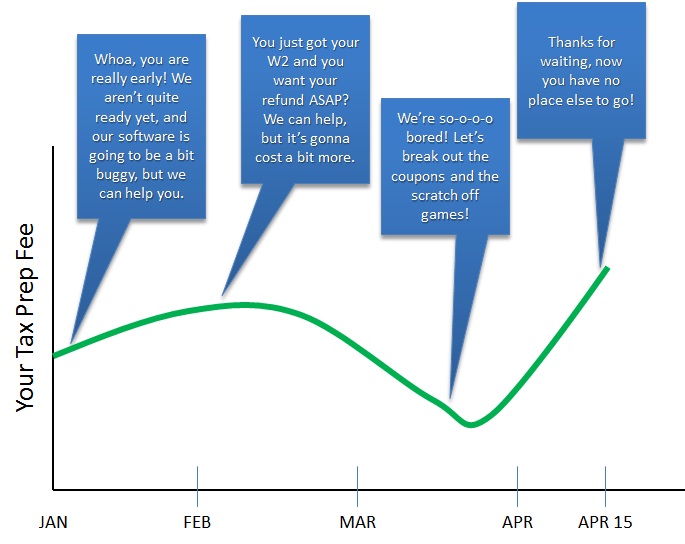 Or you can just come see me. I don't play that game. My prices are fixed at the start of tax season and remain constant throughout. You won't have to guess how much I'll charge, either. I post my prices on this website. If you know which forms you'll need you can figure out your tax prep fees before you ever decide to call.

If you don't know which forms you'll need, call me. I'd be happy to discuss it with you.