US taxpayers working and living abroad may qualify for the Foreign Earned Income Exclusion. I won’t get into how one qualifies for it here – that’s a whole different set of (highly complex) rules. Suffice it to say you essentially have to be working out of the United States for a year before it starts to become a possibility.

It’s a really good tax benefit, but not as good as I think it should be. I’ve completed the tax returns for several people who claimed it in 2015, and it’s never quite as good as they think (or hope) it will be either. There are two main reasons for that, and they are somewhat complicated. I’m going to break those two reasons down and make them easier to understand.

Reason #1: The Way the Cap is Figured.

The amount of foreign earned income that can be excluded from your income for tax purposes is capped. In 2015 it was $100,800. The maximum amount is indexed for inflation, so it goes up every year. The issue here is the cap is also limited by the amount of time you actually worked in a foreign country during the year. The only way to get the full $100,800 exclusion is to be in the foreign country all 365 days of the tax year. That’s not very common.

We have to apply the ratio of days in 2015 in the foreign country to the amount of foreign earned income to determine how much can be excluded.

Reason #2: The Way The Tax Is Calculated

The second reason this tax benefit isn’t as good as it could be is the IRS uses a special calculation to figure the tax on income that is reduced by Foreign Earned Income Exclusion. It’s right there on page 42 of the 2015 Form 1040 Instructions: If you claimed the foreign earned income exclusion, housing exclusion, or housing deduction on Form 2555 or 2555-EZ, you must figure your tax using the Foreign Earned Income Tax Worksheet. Below is the important part of that worksheet:

This matters because the IRS is not treating this excluded income like a deduction. Deductions come off the top of your income, and you receive the tax benefit at your top marginal rate. What this fancy little worksheet does is rearrange things to take the Foreign Earned Income Exclusion off the bottom of your income. Your tax savings come at your lowest marginal rates instead of your highest marginal rates.

That’s a bit of a tough concept to comprehend, so I made some graphics that I hope will clarify it for you. We will stick with the numbers from the first example. Our hero – the taxpayer – made $100,000 in 2015, of which $54,432 qualifies for the Foreign Earned Income Exclusion. We exclude that from his income. Let’s also assume that through other deductions and exemptions his taxable income on line 43 comes to $30,000. We’ll also make him single and use the tax rates for taxpayers filing as single.

First, let's look at the marginal tax rates for a single taxpayer in 2015: 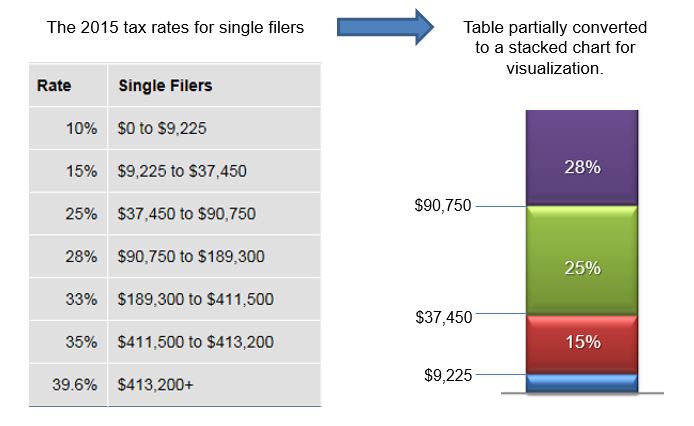 The left side shows the taxpayer's total taxable income stack next to the tax rates chart. When we exclude the foreign earned income from the top (as if it were a normal deduction) the remaining $30,000 of income is taxed at the lowest tax rates.

The right side shows nearly the same thing, except that the foreign earned income is excluded from the bottom of the income stack. That leaves the remaining $30,000 being taxed at the taxpayer's highest rates.

If that seems insignificant, it is not. If the taxpayer could just figure his tax on the $30,000 as if the foreign earned income was treated like a deduction (How it should be), then his tax bill would be $4,043. By using the worksheet and taking the Foreign Earned Income Exclusion off the bottom (How it is) the taxpayer has a tax bill of $7,500. A difference of $3,457. That little Foreign Earned Income Tax Worksheet calculation creates an 85.5% increase in the taxes owed by the taxpayer!

Don't get me wrong - it's still a HUGE tax benefit to use the Foreign Earned Income Exclusion. Without it our hero's tax bill would have been $16,900 instead of $7,500. How it is still reduced the tax burden by $9,400 for this taxpayer. That's significant money. It just irks me that our government comes up with this additional way to calculate the tax that prevents the benefit from being as good as it could be. (With the added bonus of making the tax calculation nearly incomprehensible to most taxpayers.)

On a happier note - Virginia doesn't bother with this fancy calculation for state tax returns. Like many states, Virginia's state income tax calculation begins with the Federal Adjusted Gross Income. Since the foreign earned income is removed prior to the federal AGI calculation, that income never even makes it onto the Virginia tax return. In essence, it has come off the top for Virginia tax purposes.