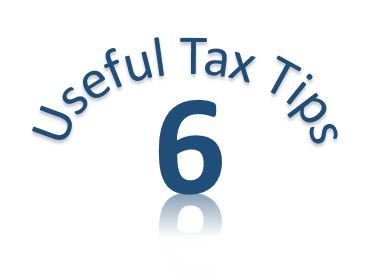 With the election of Donald Trump as President and the return of a Republican Congress to Washington the press is jumping with speculation about changes to U.S. tax laws. I suspect some tax law changes are coming in 2017, but I won’t try to speculate about what the final outcome is going to be. I don’t have a working crystal ball, and if I did I wouldn’t be giving away its secrets for free on the internet. As I’ve said elsewhere, if I could predict the future you probably couldn't afford me.

Instead, let’s focus on what we actually know for sure. There are some known tax changes on the way. Some are already here and some are coming. Knowing them can help you prepare your taxes this year and plan for the future. That is valuable information. Far more valuable than me guessing about what President-elect Trump is going to do.

3. Due Diligence forms for the AOC and CTC tax credits. This is new and annoying. The American Opportunity Tax Credit (AOC) and the Child Tax Credit (CTC) are partially refundable. That means you can have a zero ($0) tax liability to the IRS and still collect a ‘refund’. Free money from the government attracts fraud, and the IRS solution is to turn tax preparers into Tax Cops. They do this by forcing tax preparers to interview tax clients and record their responses on a special form that gets submitted with your tax return. If you are eligible to receive either of these credits I will be asking you several seemingly silly questions designed to prove that your children are your children and they are really going to college as you claim. I apologize in advance – it wasn’t my idea.

4. ACA Penalty Increases. The shared responsibility payment (a.k.a Obamacare Penalty) for not having health insurance is now $695 per uninsured adult and $347.50 per uninsured child OR 2.5% of your AGI – whichever is GREATER. (I have seen predictions the ACA will be repealed, but as of this writing it remains the law of the land.)

6. IRS Launches More Online Tools. The IRS is attempting to move more customer service features online to allow taxpayers to resolve tax issues without involving an actual agent. These new tools allow a taxpayer to see if they owe a balance to the IRS and integrate with existing payment options to allow taxpayers to “take care of their tax obligations in a fast and secure manner”.  Given the significant difficulties the IRS has had with existing online tools, I suspect there may be some growing pains. I’ll be standing by to see if/how this works.

47 provisions of the tax code will automatically expire at the end of 2016. Most of them you’ve never heard of, and will have no impact on you (unless you were looking for accelerated depreciation of your race horse, or a tax credit for mine rescue training…). There are a few, however, worth discussing.

Taxes are complicated, that’s why some tax firms charge ridiculous fees for their service. While we can’t do too much with speculation on where the tax code is going to be next year, there is a lot we can do with the hard information we have about changes that have already happened or are about to happen. As always, if you have any questions, please contact me.