Turbo Tax Made Me Do It 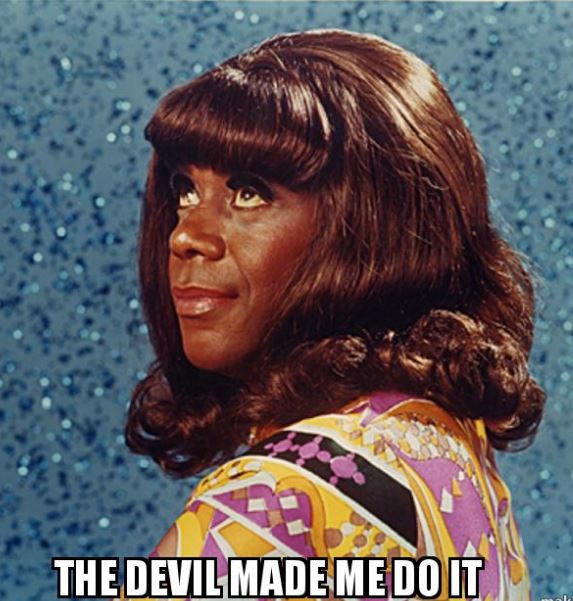 Flip Wilson was one of my favorite comedians of the 1970s. From 1970 - 1974 he hosted his own prime time comedy TV show. I used to beg my mother to let me stay up late enough to watch it. Each episode of the show consisted of several sketches featuring characters Wilson created and portrayed. One of his most popular characters was a sassy woman named Geraldine Jones, whose never seen boyfriend "Killer" was invariably in jail or at the pool hall.  It was always the Devil's fault for whatever predicament Geraldine found herself in - and she was always in some predicament. Geraldine saying "The Devil made me do it" became such a popular character and catch phrase that Flip Wilson released a comedy album as Geraldine Jones titled "The Devil Made Me Buy That Dress".

I sometimes think about Geraldine Jones when I am reviewing the self-prepared tax returns of a new client. I will see something unusual - something I think may be wrong, so I will ask the new client why they claimed a deduction or credit for which they don't seem to qualify. Most common answer: Turbo Tax let me claim it.

I envision this person sitting in front of their computer screen, reading a question from the Turbo Tax interview, not really sure of the meaning. They read the question 3 or 4 times hoping the lightning bolt of clarity will magically strike. Getting bored and frustrated with both the question and the tax preparation process in general they decide on a meaning and plug in an answer. If Turbo Tax takes it they must be OK - right?

The Tax Court has ruled on this issue many times, the most commonly cited case being Bunney vs Commissioner from April, 2000.  Mr. Bunney had taken early distributions from his IRAs, but had not reported them on his tax return. He also claimed deductions to which he was not entitled. He was assessed the tax, the 10% early withdrawal penalty tax, plus an additional 20% negligence accuracy-related error penalty. Mr. Bunney petitioned the court for relief from the 20% negligence accuracy-related penalty because he had a "complicated return" for which he used tax software. The court ruled against Mr. Bunney stating, "Tax preparation software is only as good as the information one inputs into it."

A more recent attempt (Bulatikes vs Commissioner, May 2017) ended with the same result. Mr. Bulatikes claimed deductions to which he was not entitled. To avoid the accuracy-related penalties he blamed Turbo Tax. He received the same result as Mr. Bunney - the court upheld the finding of the IRS that the use of tax software does not provide a reasonable basis for claiming deductions to which a taxpayer is not entitled.

Several times this past season I was confronted by taxpayers who were certain their Virginia vehicle registration fees were deductible items on their federal tax return. In each of these cases I heard the argument "Turbo Tax has let me do it for years." The implication being if Turbo Tax allows it, then it has to be correct. Not true.

Turbo Tax allows it because in some states the vehicle registration can be deducted. Virginia just isn't one of those states.  It is the responsibility of the taxpayer to know whether or not the vehicle registration for their state meets the criteria for a federal deduction. A trained and experienced tax professional (such as an enrolled agent) can add significant value when you don't know all the answers yourself.

If you still want to tackle your taxes on your own, just remember - Turbo Tax made me do it will not get you off the hook with the IRS!